First, I have to say that ASAE was amazing this year in their ability to deliver an incredible event, in a city that many were skeptical about.  Hats off to ASAE and St. Louis for providing one of the most exciting learning environments in recent memory.  I flew to Washington DC and back in one day, shortly after ASAE Los Angeles, to be a part of a special meeting with ASAE’s leadership to discuss the failings of the event.  It’s obvious they listened to the group.  Thank you ASAE for listening and delivering.
What I love about a conference, is that it can give people the opportunity to live out their purpose and experience their passions.  My purpose is to drive people to live life in a way where they never look back and say, “I wish I would have…”, but instead say, “I did!”, and to reach beyond themselves to experience the “ultimate life.” ASAE provides me an opportunity to engage with those who are in challenging times, and need someone to help them see a positive direction for themselves or their association.   There is nothing more rewarding than helping people move from one place in life to a better place in life.   That was never more evident than when I challenged people at the YAPNation Network-FEST Event to come to the stage during the song, "I Got a Feeling", and put money in the bucket for the Joplin Red Cross.  During the entire song, people just kept coming with money.  It was an amazing experience.  We raised $2,900 that night!  Thank you ASAE for giving me and YAPNation a platform! 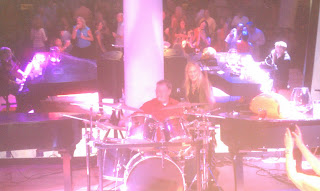 My passion is drums.  I’ve played drums since I was 5 years old, and was playing in bars when I was 13 years old.  Having the chance to play a dozen rock songs, and then jam a solo at Jive and Wail, at the YAPNation Network-FEST event, rocked my world!  It was like being on top of the world, performing the very thing that gives you the most pleasure, and knowing your closest friends in the association world were there to experience it with you.  The greatest moment was the next day, when a friend tweeted during the general session, “@tommorrison is better than the drummer playing in the general session.”  It will be a memory etched in my life forever.  Thank you ASAE for being a path to living out my passion!
For the rest of this post, I want to lend some reality to the world of association management.  I always ask the question of people when they are listening or reading on association management, is the person teaching or writing, sitting in the stands, or are they playing the game?  There are many things from the stands that really look good, but won’t work in the real game. Now having a little time to digest my thoughts after ASAE, my goal is to lend some reality thoughts from a CEO who is living the dream, and the success of an association that has grown over 500% in net surplus in 5 years, increased its membership 7.5%, and increased average revenues per member by almost 30% in the same time frame.  ...And I have a board and membership, that looks just like any other baby boomer group (I put their picture up in my ASAE Innovation Session).

Many are not going to like to like this statement, but we don’t have an association model problem.  Did you hear that?  We don’t have an association model problem.  We have a leadership problem.  It all starts at the top.   It is no different than the evolution of cars.  Cars today still have a frame, a body, wheels, and an engine.  Yet, cars in the 80’s would never compete with cars of today in performance, because of the advancements made in the technology components, and reengineering around the frame, body, tires, and engine.
The same is true for associations.  The core of the association model is still as powerful as it was 80 years ago.  Associations who are experiencing exciting growth in their organizations are making constant advancements in their association components, as well as, reengineering themselves like new cars, which enhances the performance of their core association components.  Key components associations should reengineer that will lead to incredible growth in member excitement, loyalty, and revenues are:

Growing your association is about living in a constant state of innovation, and chasing the ultimate level of relevance to your membership by focusing on the 7 areas above.

...And this can’t start from the bottom up as some might think...that takes a generation to impact change.  When it comes from the top down, an association can turn on a dime and rule its industry.    I know because I’ve lived it in the two associations I’ve ran as CEO.
Again, we don’t have an association model problem, we have a leadership challenge.  When association leadership turns from being governors, to business savvy leaders, we will see an exciting new breed of associations that have reengineered the components of the core association model to dominate their world.
Posted by Tom Morrison at 5:03 AM