When It Comes To Gen Y... Be Patient... They Will Join

Anyone over 40 years old reading this post, I want you to think about your early-to-mid 20's.  Did you join anything?  If you're like most, the answer to that question would be "no".  In our 20's we always think we are smarter than everyone else, and don't have a real need to connect with a network of people and resources that can help us make our lives better. 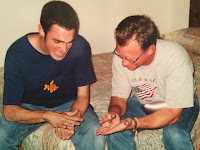 The natural course of life is that when people reach 30, they potentially are married, maybe have kids, a mortgage payment, and life circumstances that lead them to the point of thinking, "I might need some help from others who know more than me."  Gen X is currently that generation in the 31 to 51 age bracket.  Gen Y is just getting there.

Given this data, Gen X is who associations should be putting a lot of effort into recruiting.  If you just look at raw numbers, membership should be stagnant, or dropping like many corporations, due to the fact that there are 9 million fewer Gen Xers than Baby Boomers.  So of course, there should be a dip in growth given that there is an 11.5% drop in the raw number of potential members as a population.  See the chart below with the various demographic groups (provided by KGC Direct, a nationally known demographic research company). 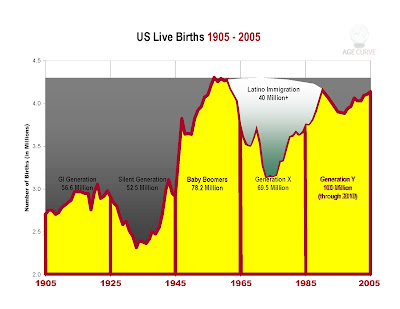 When you have a grasp on these real numbers, it brings into focus why Gen Y, who is currently 11 to 31, hasn't joined any associations.  Simply because the majority of people in their 20's, of any demographic group, didn't join associations in their 20's.  They knew who the associations were, kept up on them, but never joined them.

Then life hits, you feel all alone in the chaos of work, kids, life, debt, and mortgage payments, and begin to reach out to others to get feedback in a whole host of areas.  Enter their industry trade association…  I say there is great HOPE on this day, because the Gen Y generation is in the first year of 20 years when they will begin to see the value of associations, and be in their highest years of joining associations as with previous generations.  The question is... will you have a good brand and value for them when they arrive?

I want you to take a good look at the next chart to understand the "WHY" Gen Y will need, and ultimately join those associations who brand themselves in the right way.  I've put a line on the graph to signify the number of "good paying executive jobs" that are available to the general population.  Take a look at the chart: 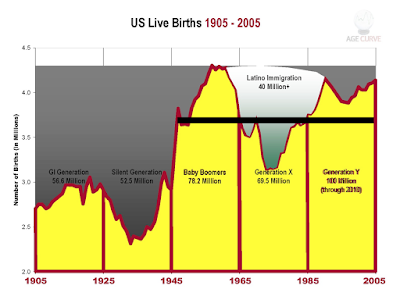 Here is what I want you to understand.  Baby Boomers didn't stay in the same job for 30 years and retire because they were so committed…they stayed there because there were no jobs to jump to.  There were 2 people in line for that "nice job" that were just as qualified as the next candidate.  Competition was fierce.

With 85 to 90 million in Gen Y, we will be back again to there being more qualified people than there are "nice paying jobs" available.  Gen Y can't afford to be "job hoppers" because there will be 2 people just as qualified as them, right in front of them asking for the same job.

So how does this benefit associations you may ask?

As the economy shakes up and down, there are going to be more future restructurings and people being let go for a variety of reasons.  Those who don't join their association and live in a cocoon, will be the ones sending thousands of resumes with no response over a 6-month period of living on unemployment, thus putting their personal life and family at risk.

Those who are members of their association, and a network of members, will be able to make a couple of phone calls to people who had previously said, "If you ever leave your company, give me a call", and they will have a job in a month, thus saving their personal life and family finances.  ...And with a job market that will be so competitive in the future, as Gen Y'ers fully enter the workforce over the next 10 years, guess what will separate them from the competition with employers?  The "Other Industry Involvement" block of their resume.  Guess where that involvement comes from?  Sitting on a task force and committee teams at YOUR association, showing leadership skills and effective teamwork.

Every association who begins to understand the numbers and data behind the demographics of our population will begin to see that they need to do two specific actions steps right now:
Don't feel like you are behind the curve on Gen Y'ers joining your association…they are only in year 1 of 20 years of seriously looking at joining associations, and associations who lose Gen X'ers are the associations who will see serious dips and challenges within their membership.

As I always say, "Quit trying to plan for a future you cannot predict, and create the future you want."